Today we planned on picking a Christmas tree. Our first, real tree. Timing didn't quite work out...so Thursday's the day! I can barely wait. :)

Instead we went out for pizza. Our little family's night out on the town, it was bound to be perfect! Wellll...we were the only ones in the restaurant, which was actually quite awkward, and Brooks was bouncing all over our booth. I could just feel the servers' and cooks' eyes on us. Hopefully they have kids and understand, I thought. Between melt downs, he would try to climb over Adam to get out of the booth and refused to eat his "hoootttt" cheese pizza (which came to us warm, but cooled down rather fast). After taking Brooks outside to calm him down, Adam brought him back in and as soon as he started eating Ava decided to help herself to a leftover piece of crust on my plate, then proceed to take a giant bite with her two tiny teeth and choke. Luckily the piece of crust came right out, along with some throw up, right onto the ground. But she was not happy when Mama took that crust away...cue the water works, oh that girl is a drama queen. ;) My pizza was delicious, but Adam's spicy buffalo and blue cheese pizza was a doozy. We only stayed for about 30 minutes before I took Ava to feed her in the car while Adam paid our bill.  On our drive home, Adam and I just looked at each other and laughed. Our night out didn't turn out how we had hoped...but we were glad to be together and we were ready for a relaxing Family Home Evening before putting the littles to bed.

While Brooks did somersault after somersault and I held Ava, Adam read us two articles, "Christmas within You" and "My Christmas Letter", from this December's Ensign.  Both were so touching...and definitely reminded us that Christmas shouldn't revolve around the gifts or the tree, and that even though some nights are hard and certain things we plan may not turn out the way we had hoped, we are so blessed to have each other. And to have the chance to celebrate our Savior's birth. 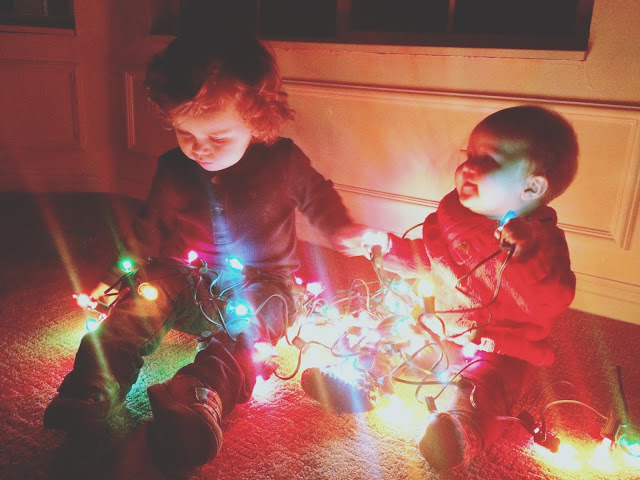 After reading the articles, we sang Christmas hymns and let the children play with the Christmas lights that will soon adorn our front door and windows. Both of them were absolutely enchanted! Ava wanted to eat the blue ones, and Brooks liked finding the "ye-woe" ones, tapping them together, and saying "Cheers!". Since driving into Salt Lake City over the weekend, and seeing the twinkling trees up and down the streets, Brooks calls Christmas lights "bee-fulls" because I told him, "Aren't they beautiful!?" Goodness, I love this time of year.

Love this picture! They are so cute! Don't you worry, any time we attempt to take the kids out to dinner, we end up being quite the sight as well! Next time, do you know what you should do? Call ME! Have the kids come play here for a couple hours and you and Adam go enjoy a relaxing dinner together. Grant can show Brooks his big boy bed and they can play with his cars for hours along with Mike. And me and Avery will play with Ava and give her snuggles. Avery is all about babies right now, and I love it because I think it is preparing her for baby sister. So please, plan a night and give me a call! I'm sure you will return the favor for me sometime too, especially since you are on my list of people to call if I get into a bind when I go into labor! :-) See you tomorrow!!!

HAHAHA, what a night! Choking is so not fun, but I had to giggle about the throw up all over the floor!

real trees are the best, yayy you will never go back!