I know it has been a few days since the first waves of the horrid tsunami crashed upon the shores and into the cities of Japan on March 11th, but I feel like, for journaling sake, I want to record my feelings after hearing, reading, and watching what has happened. 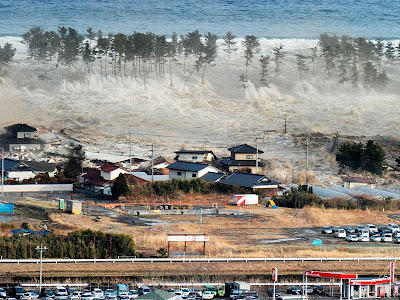 As soon as I heard that Japan had been struck by a number of devastating earth quakes, and that a tsunami had swallowed up everything in its path with no mercy, my heart sank as I thought about talking to Adam about it. Japan is very dear to Adam's heart...he lived in the city of Hiroshima and served its people as an LDS missionary for two years. He'd tell you learning the language was extremely difficult, and getting used the culture took some time; but he grew to love and respect the country and its people. The earthquake and tsunamis did their worst up in northern Japan (one of the main cities was Sendai), and Hiroshima is in the southern part of the country so it was not affected. But even though it didn't hit the area that Adam served in, it absolutely still shook us to see raw videos and read about the destruction that has happened. I only did research the first day, and haven't watched or read anything since because it hurts my heart too much (except to find the photo above...there were so many photos to choose from, it made me want to cry). I can't imagine losing loved ones, seeing my home float away like a bath toy, and have to wonder where I [or my family, if they're still with me] will be getting clean drinking water. Just thinking about the children suffering makes me ill...

I've heard Kurt Bestor's "Prayer of the Children" sung in just about every type of venue over the years...and it's message never ceases to strike a cord with me...it reaches the deepest part of my heart and makes me so grateful that I know that God loves, and knows, every single one of His children and listens to their prayers. Right now, God is listening to the prayers of the Japanese people...and Christ knows exactly what they are going through. They do not have to walk this path alone...

Adam and I have had Japan and its people in our prayers...and will keep them in our prayers long after the devastation is "over"...I can only imagine how long it is going to take to rebuild those cities from nothing. But I have no doubt we will see miracles. And because of disasters, we witness humanity reach out to help one another.

Japan is in my thoughts and prayer, reading everything on the news gives my chills that this can actually happen in our world.

Last night I was thinking about all the people that have no food and shelter being cold. It's devastating! We will continue to pray for them. Thanks for sharing the video.

I can't stop thinking about the terrible tragedy in Japan. Those poor people...it is so heartbreaking. :(

I forgot that is where Adam served- that is not easy, I hope he is doing ok. Things like this make me want to live life more fully and serve others with more of a purpose, including sharing the gospel. My mom told me yesterday that there were only 7 missionaries in the field at the time, but 100 waiting in the MTC to go out- sounds like a miracle to me.