Tangled to the rescue

I first have to say how touched I am with the good wishes and get-well comments on the last post about Brooks being sick...thank you all for your thoughtfulness! :)

Yesterday we went to Dr. Witt...they weighed him (25 lbs...big boy!) and then took his oxygen levels, which were fantastic. Such a relieve! After checking his lungs and ears, Dr. Witt said his congested cough is coming from the nasal area, and the icky stuff is not is his lungs. *whew* So we've just got to let this darn illness take it's course...lots of rest and fluids and snuggles. 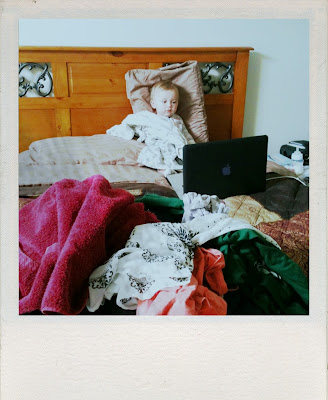 And today, while Brooks slept I got started on a few much-over-due loads of laundry. So when he woke up, I continued while he watched Tangled. Any other Disney movies Brooks could care less about, this is the only one he'll sit down and watch...to say he loves it is an understatement ;) So I propped him up with a pillow and let him watch it on Daddy's laptop, while I folded and listened. (I love that movie too:) 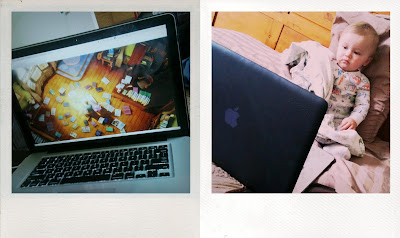 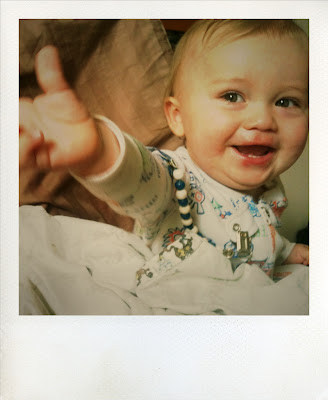 I even got a smile out of him! It may have been because I was coaxing him with a saltine cracker ;) He's on the mend though...we're working on those chapped lips too, I heart bagbalm...and hopefully when he gets completely better the sun will come out so we can get outside and soak up some vitamin D!!
Posted by Haley at 5/17/2011

a smile full of sunshine! so glad to hear he's on the mend * good job nurse mommy! I heart bag-balm too * such a safe/natural healing ointment ;)the tin is pretty too!

I need to get tangled for conrad. he loves horses!

Aw, I'm so happy that he is on the mend! I have yet to see Tangled...I'll probably be more hooked than Brooks!

He is so dang cute! That's funny that he just likes tangled. I hate to admit it, but my little boy will only sit down to watch one show too... Mama Mia. Haha! I think because he loves the music. I love Tangled, maybe I should try to get him to watch that instead!

What a good little boy!

So glad that it is nothing too serious and that the litle guy is on the mend!! What a cute little snuggly-bunny he is, nestled in the bed with one of the best Disney movies EVER! :) (Good taste, little Brooks! I love Tangled, too!!)

Wishes & Prayers that he continues to heal...and quickly!! That sunshine will be so enjoyable!! :)

So glad that it is nothing too serious and that the litle guy is on the mend!! What a cute little snuggly-bunny he is, nestled in the bed with one of the best Disney movies EVER! :) (Good taste, little Brooks! I love Tangled, too!!)

Wishes & Prayers that he continues to heal...and quickly!! That sunshine will be so enjoyable!! :)

I'm so glad he's feeling better! We sure love him! Glad everything went well at Dr. Witt's! We love that man too! :) Love you guys!

oh my gosh, he is the cutest ever!!! hoping he heals soon & is back to his little self again. its so hard when a family member is ill. :c tangled is the best ever, he has awesome taste in movies for sure!!

Okay, first of all- so glad that it was good news at the doctor. Second- what they hey is it with Tangled? Thats all my little nephew wants to watch either! I dont get it... I mean, its good but come on? ha!

What an adorable boy you have! I am so glad he is on the mend. He is way too beautiful to not be feeling his absolute best.

Btw, I adore your blog!

Aww poor bubs I hope he feels better soon, glad its not lung related and praying he is on the mend.

he is way to darn sweet in that laundry pile :)