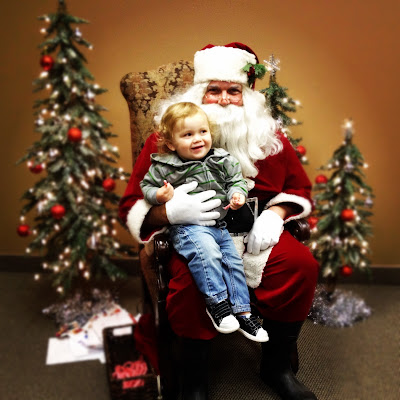 Last night right after my workout at the gym, Brooks and I met up with Adam (who got off work a little early, yes!) to visit our sweet friend Cyndi (Adam's second mom growing up) at her office where they had Santa Claus :) I was so excited to bring Brooks!...even though he doesn't understand the concept of Santa at all, I've looked forward to getting this classic photo for sweet memories. Honestly I expected a sassy look from Brooks, or tears, or for him to slither out of Santa's arms onto the floor (I mean, at first he could barely handle my wig this past Halloween, and Santa's beautiful beard is pretty intense;)...but instead he sat there, candy cane in hand, with a stoic look for about 30 seconds while we tried to get a smile out of him. We sang Wiggles' songs and played peek-a-boo...but you know what worked? Saying "Ready?....Set?..." then Brooks proudly said "GO!" followed by that cheeky grin you see in the first photo ;)
He even gave Father Christmas a few high-fives!...probably scoring brownie-points so he'll get some gummy snacks in his stocking. ha! 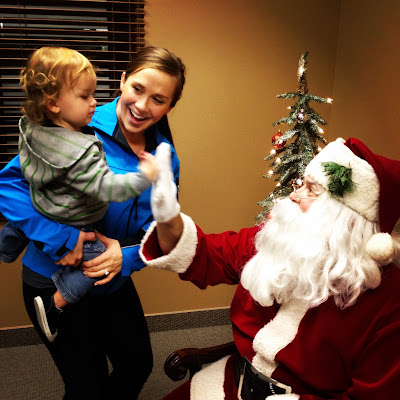 Oh my gosh... That picture of Brooks and Santa Clause is so sticking cute!! We haven't taken Avery to see Santa yet, but that is a definite for this year. Hopefully she likes Santa and doesn't try to tug on his beard.

Ashley
I'm doing a giveaway on my blog for a super cute necklace, you should stop by.

You're lucky... I know a lot of moms out there who aren't so successful at introducing Santa to their kids. My kids have never really had a problem with him. Thank goodness. Brooks is too cute!

Love the pictures and how cute that he gave him high fives! I love that little Brooks! Please let me babysit one of these days, it will be the highlight of my week! See you tonight!

oh gosh, look at those precious curls on the back of his head, and the happy smile on his face. yay for a successful santa meeting ;)
xo TJ

Aww yayy!! I am so scared to do this yet sometimes Little One surprises me!

Just when you thought

Talk about CUTE!! Love his curls!! My daughter was not a fan of Santa this year haha. Way to go Brooks!!

i tell you what, girl. if brooks were any cuter, it would be a crime. between those curls and that smile, he just melts my heart. such sweet pictures:)

Ooooh I LOVE how happy Brooks is in these pictures! What a brave boy (because I guess Santa is scary to little kids, haha)
And.... I wish I looked as good as you do after a workout! ;)

Good job, brave Brooks! You and Santa are quite a pair!!

I'm so happy you got this ever-important photo-op, Haley! His smiley face makes ME smile!!

That Santa needs that pic in his portfolio for sure! Wow! And I think Brooks has moved up to the top of Santa's Nice list!

Ready set go? That melts my heart, how cute. That picture is perfect!