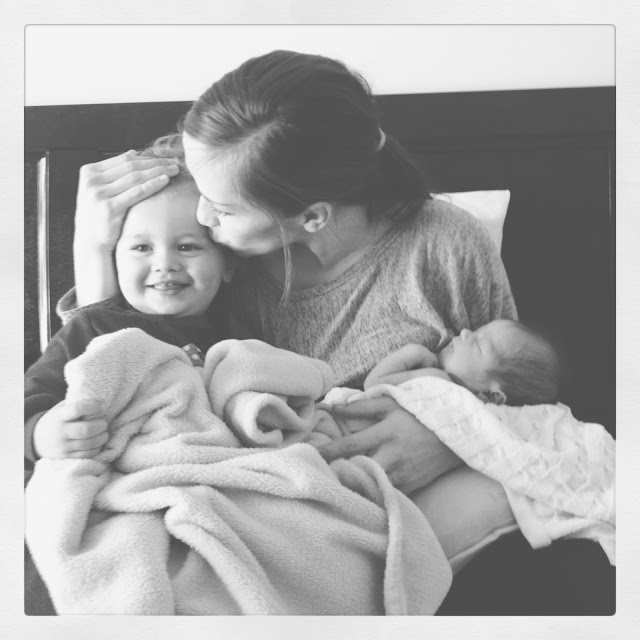 ...I've witnessed, for the second time, that my heart has grown to deeply love another person, a tiny baby girl who is half Adam and half me, more than I can say.

...I have come to find that 3 people (an adult, toddler, and baby) can manage to fit pretty well on a rocking chair together.

...I have been proud of myself for working through my anxiety of breast feeding while out and about and around other people. As long as they're comfortable, I'm comfortable. :)

...I have seen my sweet husband be the most amazing father. Adam can be wild and crazy with Brooks, and then knows when to change gears and be so tender and calm with Ava. Except when she's hungry and fussy, then he gets a little nervous. ;)

...I learned that it's actually pretty hilarious when, while nursing Ava, my sassy little Brooks managed to swipe one of my Lily Padz and put it on his head like a yamaka. ha!

...I've seen Ava smile more and more every day. Such a beautiful smile that girl has.

...I have learned that if I had three wishes for a magic genie, one of them would definitely be to have more than two arms.

...I have officially become numb to the grossness of diapers. When Ava was still in the tiny newborn diapers, I told Adam, "Hey love, just throwin' it out there...couldn't you say Ava's diapers are 'bite-size' and Brooks' are 'king-size'?" Yow-za.

...I've been so grateful for Brooks' independent spirit that has helped him be okay with doing his own thing when I need to take care of Ava.

...I've been grateful for a hard working husband who's patient and understanding of me. He'll ask how my day was, and sometimes it goes something like this... "Ava cried a lot today, and my back kills because she wouldn't let me put her down. Oh, and Brooks had a melt down at the grocery store's parking lot...don't worry though, another sweet mother I don't know offered him cheez-its and a juice box and he was all sorts of chipper after.  So after a good long nap for all 3 of us, we just watched movies and relaxed the rest of the day. I'm sorry the laundry isn't folded and dinner isn't ready." To which he'll reply, "Let's make some of your awesome turkey avocado sandwiches for dinner, and then I'll rub your back while we watch a movie." My kinda man.

...going on a walk to get some frozen yogurt, while wearing baby Ava in the Moby wrap and pushing Brooks in the stroller, hits the spot. Every. Time. 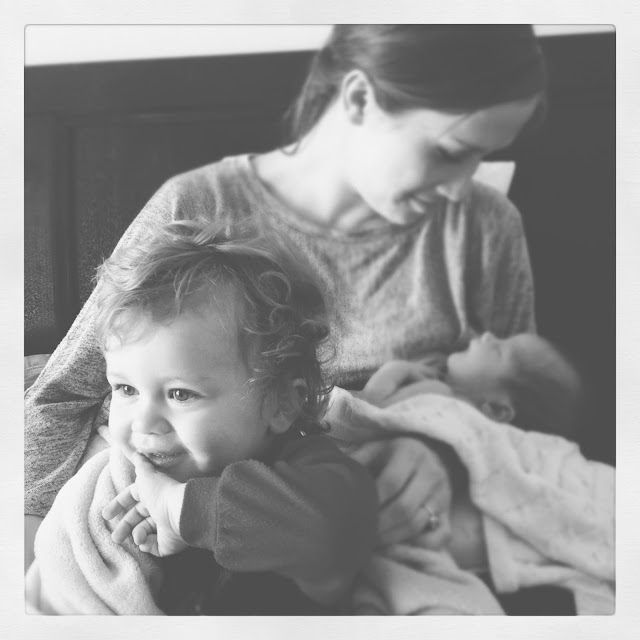 ...my heart continues to melt daily when Brooks wants to hold his little sister. He likes to lay down, then have me lay her next to him, with his arm out and under her head. :)

...taking a long, hot shower (which does not happen very often) has become like 15 glorious minutes in a spa.

...I've learned that in no way, shape, or form are girls guaranteed to be more feminine or dainty. Ava's toots and burps are barbaric. Haha!

...I think that yellow and blue are my favorite colors to put my baby girl in.

...I was more than okay when the other night was just a frozen-pizza-kind-of-night. DiGiorno and Frescetta how I love you.

...I now know that we weren't doing "round 2" of the baby thing...it was "round 1" again.  Ava is so different than Brooks was when he was a new babe...she's not quite as easy, but definitely just as sweet. :)

...I have learned that co-sleeping is okay...and I actually kind of love it.  But within the next week or two we'll be working on her sleeping in her bassinet. Let's hope I, oops I mean she, can do it. ;)

...my lack of sleep makes me do crazy things. Like answer the door with my baby girl on my right shoulder, exposing my left side that was covered but oh-so obviously not "hooked up"...dang you nursing bra.

...that lack of sleep just mentioned also made me care even less than I would have before that my son, standing next to me when I answered the door, was still in PJs and had jam all over his face, at 3 in the afternoon.

...I've learned even more that it's okay to just cry. Letting go of a few tears, or a whole bunch of tears, can do wonders for my heart and mind.

...I've depended on prayer more than ever...especially in those moments, that happen all too often, when I feel overwhelmed and under qualified.

...getting out and spending time with friends and their little ones on a regular basis is a necessity. I love being able to  see my boy play, and I enjoy good conversation. Win-win!

...comparing myself and trying to measure up to other mothers gets me absolutely no where. Same thing with comparing my children to other little ones. We're all different, and our various strengths and weaknesses compliment each other, just how it should be. :) 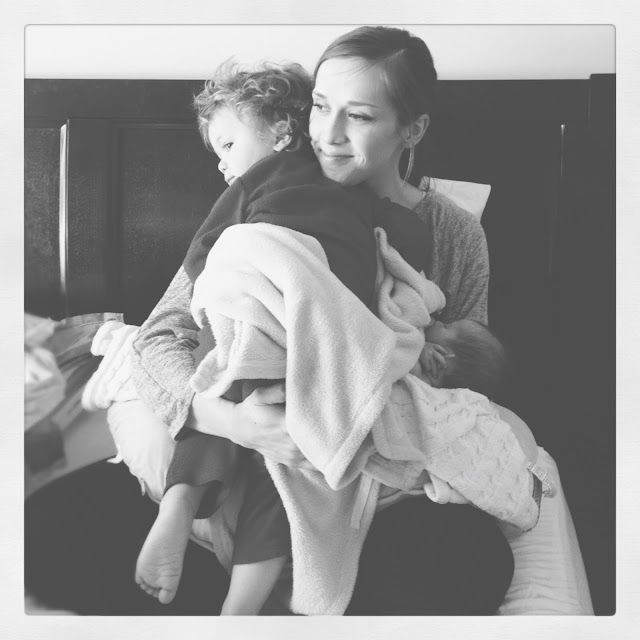 { my sister took these pictures on the first Sunday Ava was home...I'll treasure them forever }


Oh and look what came in the mail today!
A belated Mother's Day gift from my sweetheart...I absolutely LOVE it.
Thank you Adam. I love you, and I'm so glad Brooks and Ava are ours forever. 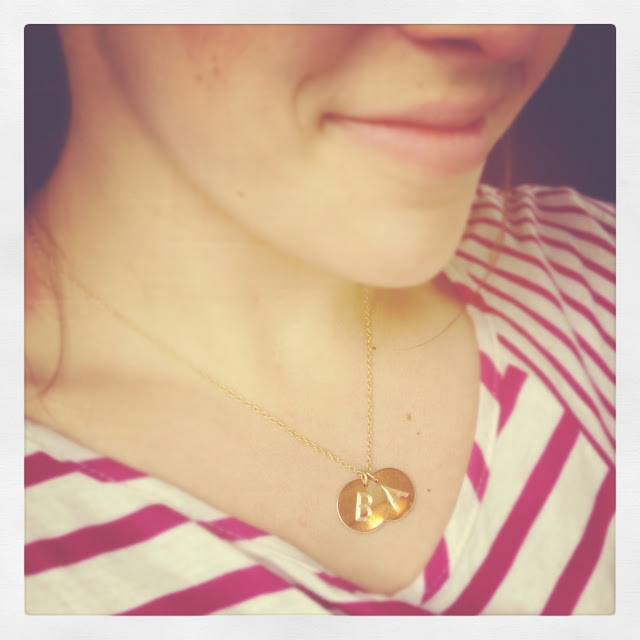 Tears, Haley, tears from that last picture of you and your little ones. I'm not kidding you--frame it. It's seriously a work of art in it's own way. So much emotion and inspiration and interpretation. I want one just like it when we have another little one.
It's so encouraging to hear that other moms have the same challenges that I do--and react to them most often in the same way. My hair is long only because it's that much easier to put in a sock bun--or twisted bun--we eat scrambled eggs and toast for dinner far too often, I'm bizaarly intrigued by what I'm going to find in Jude's diaper every time he smells poopy, frozen yogurt is my life line, and I get back rubs every day. I love you. I also didn't shower until 3 this afternoon and I immediately put my pi's back on. and I have ONE kid. Who plays by himself. You're amazing.

So very comforting to hear someone else say the woes if my heart and mind! Thanks for sharing the good, bad and funny, I too often wonder what condition I will catch myself in when I answer the door... You are a great mama!

I got a little teary eyed. I'm only 18 and I can't wait until the day when I get to understand what you are feeling. Taking care of a family is the ultimate job. You're a wonderful mother and person. I love this post a lot. Congratulations on your new addition to an already beautiful family. :)

Oh Haley, you are supermom! And your babies are so beautiful.
The transition from one to two children was really hard for me, I cried every day because I was SO exhausted. And like Ava, Avery was a lot harder baby than Grant was, but just as sweet too :) I feel like once Avery got to about 5 or 6 months things slowed down a bit because she was happy to lay down on the floor and "play". You are doing a fabulous job with 2! And there is nothing wrong with pj's at 3:00 pm! Or at least hopefully not, or I'm in big trouble!

This was a beautiful post! So real and touching! You are an amazing girl and mother Haley!! So glad to call you family! <3

I laughed and got teary-eyed all in the same post...you are one incredible mama,thank you for always being so real!P.S.My niece used to wear her "yamaka" as well when her little sister was nursing...made for good entertainment!haha!

Love the neckless!! so cute!

These pictures just made my uterus swell a tiny bit :) ok a big bit.. what a beautiful post.. these are all memories your going to look back at and cherish

Oh boy, Haley. You NEVER fail to amaze me with your oh so eloquent words. The way that you capture the ins and outs of this beautiful thing we call motherhood...well, it's simply wonderful.

And just when you have me all teary eyed and sappy and full of emotions, you throw in some super funnies (bite-size versus king-size? HAHAHA).

OH and what you said about comparing ourselves and our children to others? You are exactly right...it's never a good idea. But sometimes it's so hard NOT to do. :( I found a quote a couple weeks ago..."Comparison is the Thief of Joy."--Theodore Roosevelt. Isn't that just so true?

That gift is just SO perfect. I love love love the idea of wearing the initials of our little loves. One of my most favorite necklaces is one that I bought just before Hudson was born...it's a big H. :)

AND lastly, those photos are SO SO SO precious. I just love the tenderness and love that shines through.

Oh boy, Haley. You NEVER fail to amaze me with your oh so eloquent words. The way that you capture the ins and outs of this beautiful thing we call motherhood...well, it's simply wonderful.

And just when you have me all teary eyed and sappy and full of emotions, you throw in some super funnies (bite-size versus king-size? HAHAHA).

OH and what you said about comparing ourselves and our children to others? You are exactly right...it's never a good idea. But sometimes it's so hard NOT to do. :( I found a quote a couple weeks ago..."Comparison is the Thief of Joy."--Theodore Roosevelt. Isn't that just so true?

That gift is just SO perfect. I love love love the idea of wearing the initials of our little loves. One of my most favorite necklaces is one that I bought just before Hudson was born...it's a big H. :)

AND lastly, those photos are SO SO SO precious. I just love the tenderness and love that shines through.

get an ergo! i use mine EVERY day for elle. it's perfect for the park and store to nurse and no one has to be weird about being around a nursing mom....

you really are my motherhood inspiration.

Your an amazing mom, Haley. This made me cry and laugh and cry...I am so happy I can relate to some of it:-)

I found you via a craft on Pintrest, I love your sweet and uplifting messages of motherhood. Thank you for sharing! :) I love your beautiful necklace, I've been looking for something to monogram the initials of my little ones. Can I ask where you bought it? Thanks!